Growing up as a kid in Pittsburgh, my family went to Kennywood at least once every summer for our school’s summer picnic. Kennywood, which was founded in 1898, is an amusement park situated on the Monongahela River in West Mifflin, PA. Kennywood was founded in 1898, with original rides from the 1920s still in operation today. Check out this commercial from the 80’s that I somehow remembered all the words to!

As a kid, I loved the roller coasters. The Racer was always a favorite, because the ride had two separate tracks and the roller coasters actually “raced” each other. It was always fun to get on opposing cars with your friends and yell and wave as you passed each other by. The Jack Rabbit was another favorite – one of those jerky, bumpy rides that had you flying out of your seat and into the safety bar. Then there was the Thunderbolt, which is still probably my favorite roller coaster at Kennywood. The Thunderbolt starts you off by immediately heading down a hill. Over the years, new rides were added, like the Laser Loop, the Steel Phantom, and the Phantom’s Revenge, but judging by the long lines for all the rides when we went in August, newer doesn’t necessarily mean better!

There are plenty of other thrill rides, too. The Whip will have you laughing as you go around the curve and try not to squish whoever you’re riding with. The Turtle is pretty tame, but is still fun, even for smaller riders, especially when it gets going. The Musik Express is fast and loud with flashing lights. As for water rides, there’s the Pittsburgh Plunge and the Raging Rapids, a whitewater rafting ride with plenty of bumps, waterfalls, and water canons that will leave you soaked!

I had been to Kennywood twice in the 2000s, with the most recent time being in 2012. On that trip, it was just my dad and I, and we went on EVERYTHING. It was so much fun. This trip, however, was a little different, because we brought Jacob. We figured that since he’s been to Tivoli Gardens and Tibidabo, it was about time we took him someplace closer to home.  My parents live in Pittsburgh, so we decided to visit for the weekend and go to Kennywood in the afternoon. We went with my parents, a childhood friend of mine, and his family. 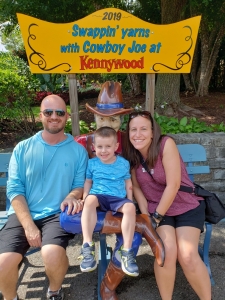 First stop, a photo with Cowboy Joe. I will be totally honest. I have no idea what Cowboy Joe’s story is, or what he has to do with Kennywood, but what I can tell you is that he has been there as long as I can remember and my mom swears that she probably has a picture of me at Jacob’s age, sitting on Cowboy Joe’s lap. So… yay, nostalgia!

I don’t remember spending much time in Kiddieland at all as a kid, but there was where we went first, and where we spent most of our time. At first, Jacob wasn’t really sure what to ride; I think he was overwhelmed with so many things being so close together. Then he spotted a helicopter ride and he was off and running. As soon as the helicopter ride was

done, he ran to the flying elephants. Then we headed off towards the Turtle, and took him on a “big kid” ride. Then it was back to Kiddieland, for another trip on the elephants, the baby Wave Swinger, the Red Baron airplanes and the Pounce Bounce. He was having a blast, despite the heat and the crowds.

At one point, my dad, my friend, his son, and I all slipped away to ride the Thunderbolt. If I was going to miss out on watching my little guy ride rides, (he rode the Whippersnapper, the elephants, and the Pounce Bounce again!) it had to be to go on the Thunderbolt. Still my favorite!

We had some of the usual amusement park junk food – pretzels and ice cream and icees and french fries. We played a bunch of games and finally got Jacob into Thomas Town (a Thomas the Train themed section of Kiddieland) to do Flynn’s Fire Training. But the little guy was pretty worn out, so that was about it. While we were saying our goodbyes to our friends, we 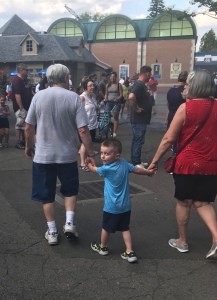 ended up running into another old friend, a guy I knew from grade school. He was there with his kids, too.

It was pretty crazy to think that once upon a time, we were those kids running around the park and asking our parents for money to play games and buy food. Now we’re the ones waiting in line with our kiddos, buying them treats and trying to win them stuffed animals. I had a blast visiting Kennywood with Jacob, and I was especially glad that my parents were there to experience it, too. Kennywood was a big part of my childhood, and seeing my own kid have so much fun there was really special.

Hi from the Goodwins!

Hey there! Thanks for visiting. Check out our latest adventures with #KidGoodwin, follow us on social media, or leave us a message! We’d love to hear from you.