When it comes to figuring out how and when to fly with a baby or toddler, there are lots of different schools of thought. Fly overnight when the kid should be sleeping. Fly nonstop so you don’t have to get off the plane. Fly with a layover so your kid can run around and stretch their legs at the airport in between flights. Give your kids Benadryl to help them sleep. Pack lots of activities to keep them busy.

I already talked about #ToddlerGoodwin’s first flight, so I’m not going to bore you with all those details. We did the best we could on our flights to/from Copenhagen. #ToddlerGoodwin didn’t get a whole lot of sleep, but he also never had a complete and total meltdown, so I consider our trips a success.

Here are some tips…

I can’t really speak for the timing of flights. We flew overnight to Copenhagen because we thought #ToddlerGoodwin would be so tired from all the excitement that he’d eventually just pass out. Not the case, when dinner is served around 10 p.m. and the lights are on in the cabin until about midnight. Oops. So the nighttime flight didn’t work out like we thought.

Coming home from Copenhagen we flew during the day. We figured since he was up, we’d just keep him busy with little activities and the iPad, and if he wanted to nap sometime in the afternoon (around nap time-ish) and could actually get comfortable, he’d nap. And he did, right around his usual time. Except… the toddler girl in the row in front of us wasn’t having anything to do with nap time. She was a hot mess.

Totally not the kid’s fault. I get it. You’re stuck in a plane. You can’t move or get comfortable. Your parents didn’t buy you your own seat, which means you’re stuck on someone’s lap, and there’s already no room in an airplane row, anyway. You’re hot, and you’re tired, and your older sister wants nothing to do with you, your dad doesn’t know what to do with you, and your mom is just drinking her beer and playing backgammon on the seat-screen in front of her.

Again, I’m not blaming the kid… But this whole travel situation was a nightmare. The little girl was screaming and crying, snot flying everywhere, and the parents did NOTHING to calm her down or quiet her.

DON’T BE THOSE PARENTS.

Not just because their little girl’s screaming woke up our kid, who then got pissed off because he couldn’t sleep, and THEN got scared because he couldn’t figure out why this screaming, snotty, red-faced little girl looked like she was trying to climb over the back of the seat to get to us… Even though THAT totally sucked. What sucked even more is that the little girl was eventually so exhausted from her tantrum that she passed out for almost two hours. Lucky her. #ToddlerGoodwin got maybe half an hour of sleep before her tantrum reached full-scale nuclear disaster level, and once he was up, he was up again. But we kept him busy and got him through the flight just fine… no fussing and yelling. 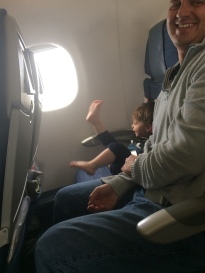 Hopefully other passengers will understand that little kids sometimes have to fly with their parents to get from Point A to Point B. Hopefully they understand that sometimes little kids cry because they’re too young to understand what’s going on, or why their ears hurt, or why they have to stay in a seat for 6 hours. Sometimes crying is all they’ve got to communicate that they’re upset because they’re not even talking yet.

But hopefully their parents actually make an effort to calm and quiet their child; not just for their sake, but for the sake of everybody else on the plane, as well.

However you decide to arrange your flights – as soon as you get to your destination, try to get everybody back on schedule as soon as possible to fight off jet lag. I know some people suggest staying up and chugging through the day so that everyone is tired and sleeps all night… but there’s no way any of us could have done it. We got in around nap time (Copenhagen time, anyway) and everybody took a nap. We were fortunate enough that when everybody woke up, it was like we were back home. No grumpy tired adults who didn’t feel like doing anything, no cranky toddler, no sleepless nights. We were right back on schedule.

Same thing when we got home. We made it home in the late afternoon, got unpacked and did some stuff around the house, had dinner, got our showers and our baths, and put #ToddlerGoodwin to bed around his usual bedtime… and that was that!

Hi from the Goodwins!

Hey there! Thanks for visiting. Check out our latest adventures with #KidGoodwin, follow us on social media, or leave us a message! We’d love to hear from you.